This morning as I poured my first cup of coffee, I looked down and realized the half and half was spoiled. A bit unusual since I drink plenty of it and usually run out before that could ever happen. I decided to throw on a baseball hat, closest jacket, (because you know I was still in my P.J.'s), and head to the corner store to get some and maybe a paper. (yeah that WAS me you saw) 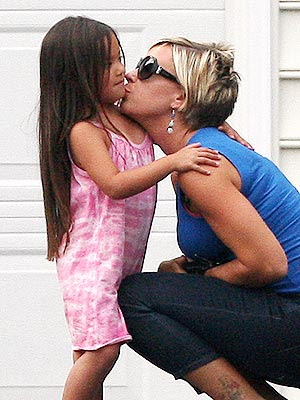 While I was there cashing out, I heard the voice of the familiar Kate of Jon and Kate plus 8 on the TV that was hanging from the ceiling. I'm not one to stop and watch TV in a store. I know its there to keep customers from getting annoyed while standing in line. (I get annoyed because TV's are everywhere). I was on my way out the door and I stopped. I stopped to listen to Kate. I heard her tell of how this divorce was not something she ever wanted for herself or her children. How she knew that it was not "the best" for them, but what had to be done. How she wanted to show them that she as their mom could and would do the best in the circumstances given to her.

I got it. I got that I am one of those judgemental people who has shook my "I can't believe them " head at the news stand magazines, when once again her face and that of her ex? husband were staring at me while I wait for my stuff to go down the dirty conveyor belt at Walmart.

She is a mom. A mom that loves her children and loved her "husband". Yes, Kate probably wishes now that she had made other choices with putting her family all over the T.V. while they were too little to say "no" for themselves. But, really, would that have changed where she is now? I don't believe it would.

I think she would still find herself, in a place she never thought or would to be. Divorced from the man she thought would stay with her, love her, be committed to her and their marriage till death do them part. T.V. show or not.

I on the other hand, found myself (where I thought I'd never be), in the middle of a corner store, standing there, glued to the TV while holding my half and half and local newspaper, listening. I didn't realize just where I was until another lady came through the door, stopped in her tracks right beside me, looked up, and listened.

Women know other women. They feel each others burdens as if they were their own sometimes. This morning, I felt Kates. As a wife and mother. I think the lady standing beside me in the store did too. I wish I could hug on Kate over a cup of coffee. I would apologize for my lack of understanding and compassion for her.

I would tell her that, I will pray for her and her children, and she can call me to have coffee when she needs.

And be so grateful for my own Blue Eyed husband and all that we too have been through in 25 years of marriage. And I will remember to be more compassionate and less judgemental the next time I find myself shaking my head in the check out aisle at Walmart.

I feel like she's doing a great job and with the whole world watching it has to be tough....Barb

Yes... may the Lord bless Kate
as she continues to raise her
wee ones!

So interesting, because I had the exact same reaction to seeing her on TV today as well.

Do you ever wonder if we give God a headache?

Absolutely agree! I feel she is doing a great job with the situation while her husband is out there behaving like a college student. I know we're only hearing one side of the story, but actions do speak and she is home with the kids while he's in another country with a different woman. I do hope things work out for the kids and they aren't affected by this divorce in the years to come. Now, please Lisa, put some clothes on before heading out!!! LOL!

This is good, Lisa. Sorry I haven't stopped in for awhile, I've been busy with another project. I seen the photos of John out 'having fun'... I can relate to being in a place you never thought you'd find yourself. My 1st marriage ended after 17 years...I didn't want it to. I was thinking last night about standing at the altar, taking those vows... I never thought I'd be divorced. Thought I'd be with him and provided for till death. Not so. Divorce and the ensuing mess is tough. Their kids (J.& K's.)are wondering why daddy doesn't live at home anymore.

oh, and BTW, I used to throw some sweatpants on over my pj's and drive the kids to school... only the kids knew I had the jammies on underneath... tee hee.

I always liked Kate and have even defended her in some family discussions! LOL! She's a strong woman and a loving and devoted mother.

I wish her nothing but happiness in whatever the good Lord has ahead for her.